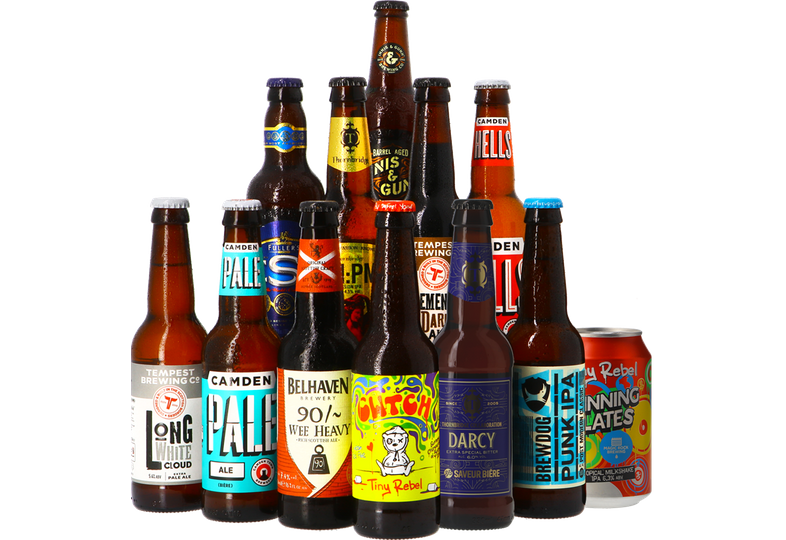 Fans of quality beer will love this tour of the British Isles in beer. Save The Queen promises a rich and rewarding tour of the UK and Ireland, showing off some of the very best Craft Beers on offer.

At HOPT we want to bring you the very best beers, right to your door. Sometimes, one of the bottles listed is out of stock, in which case we'll replace it with a bottle of equivalent or greater value to ensure your experience at HOPT is the best it can be!

Thornbridge AM:PM
Thornbridge Brewery3.20€/ unit
3.20€
Decreasing pricesUntil 2.82€
Thornbridge Wild Raven
Thornbridge Brewery3.90€/ unit
3.90€
Brewdog Dead Pony Pale Ale
Brewdog Brewery3.20€/ unit
3.20€
Decreasing pricesUntil 2.82€
-10%
Craftbeer Tasting Pack 12x33cl
Saveur Bière35.90€/ unit
35.90€
Instead of39.90€
DeliveryAnti-breakage packagingOur terms of delivery
Your loyalty rewardedYour fidelity rewarded: Create an accountOur loyalty program (Club Hopt)
Customer reviews4,4/5
Our customers love us and we love them back!EKOMI
4,44,6
x
Since 2007The largest beer choice on the internet Who we are!
Customer service
About us
Terms
Follow us
Languages
Our other sites
WHAT PEOPLE ARE SAYING ABOUT US
Saveur Bière is France's market-leader for online beer sales, offering an ever growing range of bottled beers, beer pumps, beer glasses, and beer assortments. Our young, dynamic team has just one goal – customer satisfaction. To ensure our clients are 100% satisfied, we do everything possible to offer a quality service, responding to the needs of our customers and searching out the finest beers you'll find anywhere. True specialists in beer and breweries, our IT, logistics, purchasing, sales and customer-service teams work hard every day to make sure your customer experience is the best it can be.
The abuse of alcohol is dangerous for your health. Please drink responsibly.