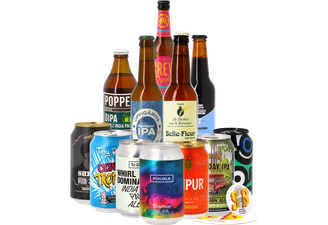 A powerful and fruity IPA, brewed by the Swedes from the Oppigårds Brewery!

Crew Republic In Your Face

Upstart IPA with a larger-than-life citrus and malt character

Founders All Day IPA Now in a can

Originally brewed in the 18th Century with a higher alcohol content and more hops, IPA beer was designed to survive the long sea-voyage to India where it was an immediate hit with soldiers of the British Empire.

Since then, the style has grown in popularity, embraced by breweries the world over, each putting its own twist on this timeless beer style. Characterised by a strong, bitter hops profile, IPAs have become the very pinnacle of Craft Brewing achievement:

At HOPT we want to bring you the very best beers, right to your door. Sometimes, one of the bottles listed is out of stock, in which case we'll replace it with a bottle of equivalent or greater value to ensure your experience at HOPT is the best it can be!