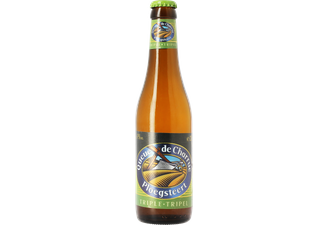 "Queue de charrue" - the plough handle - takes its name from the French translation of the Flemish border village “Ploegsteert” which is home to the brewery. During WWI the village became known to the Tommies as Plug Street.

Queue de Charrue Triple is a bottle-conditioned Blonde beer with golden highlights, and capped with an inviting white head.

In the glass it reveals aromas of caramelised malt together with spicy notes, the palate offering seductive spicy and fruity flavours, accompanied by a pleasant bitterness.

This Triple beer is just waiting to be tasted to reveal its full spectrum of flavours!