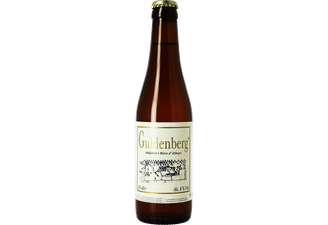 Guldenberg beer is named after Guldenberg Abbey, near Wevelgem, in Belgium, where beer was once brewed. Unfiltered, unpasteurised and bottle conditioned, Guldenberg is the fruit of a traditional craft brewing process.

It is brewed by the De Ranke brewery, based in Belgian Flanders, which offers a range of characterful craft beers that are often strongly hopped. The brewery’s flagship beer is its XX Bitter, famous for its strong bitterness and very distinctive flavours.

Guldenberg pours an inviting dark yellow blonde, slightly hazy due to the significant sediment deposit at the bottom of the bottle. It is capped with an attractive white head, generous but neither dense nor long lasting in the glass.

Guldenberg releases flowery and fruity aromas of hops with a touch of lemon zest . You can also detect an odour of yeast, like fresh bread. The alcohol content is barely perceptible on the nose despite this beer’s relatively high ABV.

The attack on the palate is fairly gentle and rounded, tending towards malty flavours. The fruity notes of hops take over next, making the transition towards a pronounced but well-balanced bitterness that lingers in mouth for a very long time. The alcohol is barely perceptible but adds a little touch of warmth to the overall character. Note that Guldenberg can be laid down for quite a long period (at least five years after bottling!)