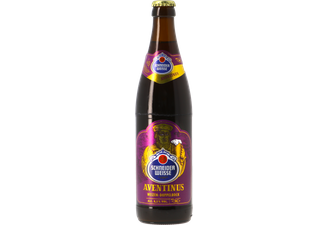 Schneider Weisse Unser Aventinus Tap 6 is a German beer from Schneider & Sohn in Bayern. Specialized in wheat beers (Weissbiers), the flagship product of this Brewery is the Schneider Weisse TAP 7, formerly named Schneider Weisse Original because it was prepared according to the same recipe since 1872.

It pours a dark ruby colour, with a thin and thick head, while the beer itself is very sparkling. This is a top-fermented beer made in respect with the weizendoppelbock style. In the nose, the aromas are very fruity: banana, plum, apple, etc. but one can also sense the presence of wheat malt. Three different kinds of malt are used during the brewing of this beer made up of 60% wheat. Its nose is really sweet and pleasant, with powerful aromas, in particular of clove. In the mouth, the alcohol strikes not at the entrance but rather in the end.

A fruity impression remains during the whole tasting and turns dry in the end of the palate. In the end of the mouth, one can taste a strong caramelized flavour followed by a bitter round end.

A Bock Beer is a low-fermented beer brewed in the south of Germany, in Bayern, and whose ABV is relatively high and starts from 6°. Compared to the Bock beers, the weizenbock is a beer top-fermented and much stronger, more amber and spicier due to the use of different yeast. Finally, the weizendoppelbock (twice more wheat) is an even stronger version. It is darker, with a more distinctive taste of malt which leaves less bitterness. It is a very sparkling and is topped by a thick generous head.

Cerveceria Mexicana La Bufadora Maibock “I'm gonna show you kids the time of your life. Get ready for two weeks at the happiest place on Earth...TIJUANA!!!!” -Krusty the Clown Cerveceria Mexicana is a Mexican brewery from Tijuana, a city in the northern-eastern corner of Baja California just a short drive east from the Pacific Ocean. Best known for its Dia de los... Read more