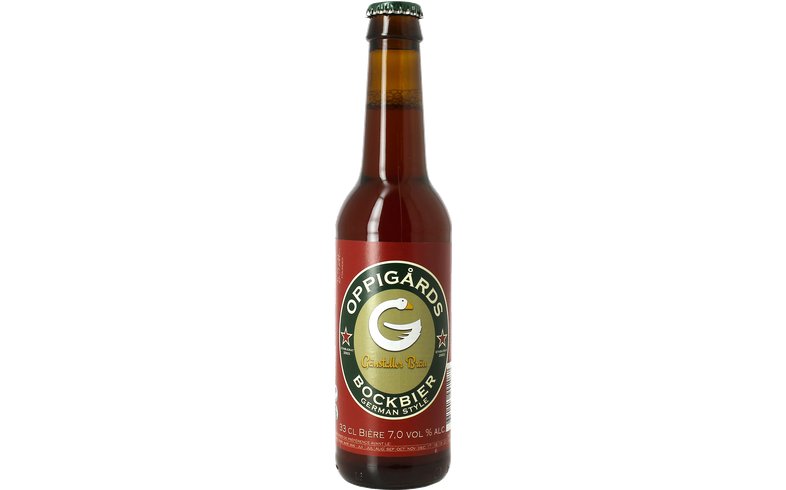 Thick, slick and very, very rich, Oppigårds and Gänstaller have made one superb Bockbier exclusively for Beery Christmas

The Beer: Sweet, rich and velvety, Oppigårds and Ganställer Bräu's collaboration has all the classic hallmarks of the Bockbier style. Pouring deep chocolate brown beneath a small tan head, you'll be assailed by massive gingerbread treacle toffee tones with a mix of fresh-cut and hayloft grasses.

On the tongue, this silky brew shows off a powerful mix of candied fruit, with cherry vanilla chocolate cookies, and pumpernickel bread dough, set in a remarkably crisp, well-balanced body.

The brewery: Beery Christmas 2017's first collaboration, Bockbier is brought to you by Sweden's Oppigards and Germany's Gänstaller Bräu.

A long-time favourite of Saveur Bière and Hopt customers, Oppigards is a family-run brewery from Dalarna in central Sweden. Set amongst meadows, forests and lakes, Oppigards takes its inspiration from the natural environment, embracing sustainability in every aspect of its production cycle.

Oppigards's partner in this adventure, Gänstaller Bräu, is a German father and daughter team based in the town of Schnaid, an hour west of Nuremberg. It is not the first time the two breweries have worked together, and once again their teamwork has paid dividends, as Andreas Gänstaller has really taught Oppigards the secrets of the Bockbier style!

The style: Originally brewed in the city of Einbeck some 700 years ago, Bock beers are characterised by a rich, dark, malty quality that conjures up fruity pumpernickel bread. They are lightly-hopped with just enough bitterness to counterpoint the sweet caramel tones.

Over time, Bock became popular in Bavaria, in particular Munich, where its pronunciation sounded like Ein Bock – a goat – and so the name Bock, as well as the association with the goat emblem was born.

Food pairings: Rich, sweet, and full-bodied, Bock beers are a superb aperitif, and make a perfect prelude to roast meats and game. This sumptuous example of the style is a terrific complement to a rich paté de campagne with prunes, especially spread generously on freshly-toasted artisanal bread.