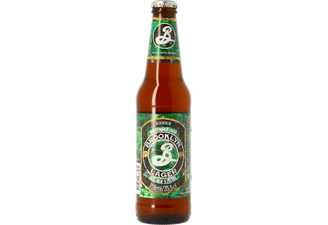 What's better than an excellent American Lager during warm summer days or at home when winter strikes? Discover the most popular beer from Brooklyn Brewery!

This beer is the greatest achievement and success of Brooklyn Brewery. Based on a recipe dated from before the American Prohibition, it stands for the best Lager beer in the US.

Visually, the Brooklyn Lager pours a nice blond colour specific to lagers and topped by a thin beige head. The floral aromas released prove that the dry hopping technique was used during brewing; the whole is finely balanced thanks to the malty notes. In the mouth, it features light and soft flavours that lead us towards a fine bitter finish.

This beer belongs to the High-quality Lagers produced by numerous American Breweries, it has been rewarded many times: Gold Medal in the “Championship Beer Festival” in 2010 and 2011, but also the Hong Kong International Beer Awards Winner in 2010.