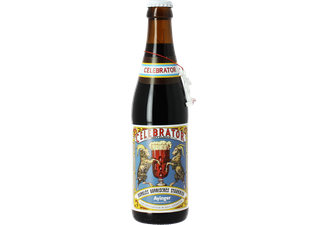 Ayinger Celebrator is considered as one of the best beer of the World, according to the famous Chicago Testing Institute! This Doppelbock, brewed by the German brewery Ayinger according to a monastic recipe is powerful and characterful!

This full bodied German beer has a deep black robe topped by a nice beige head. On the nose, there is an interesting complexity between aromas of plum, coffee, caramel and dark chocolate. In the mouth, there is a surprising attack balanced between flavours of roasted malt and notes of caramel and bread. The finish is mildly dry and bitter.

After tasting this beer, you will understand why this beer has received the best note on Ratebeer. There is a rare complexity on this beer that you will not find in any other German beer. However, the German brewery Ayinger also proposes a delightful and refreshing wheat beer, the Ayinger Braü-Weisse, considered as the “Champagne of German beers”! Cerveceria Mexicana La Bufadora Maibock “I'm gonna show you kids the time of your life. Get ready for two weeks at the happiest place on Earth...TIJUANA!!!!” -Krusty the Clown Cerveceria Mexicana is a Mexican brewery from Tijuana, a city in the northern-eastern corner of Baja California just a short drive east from the Pacific Ocean. Best known for its Dia de los... Read more