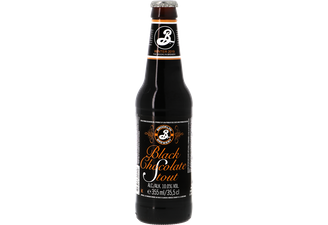 The USP of Brooklyn Brewery is that it is rooted in the traditions of ale brewing. It knows the classical techniques and uses them to brew up something new and modern. What happens is that when beer lovers pick up a drink with the Brooklyn label on it, they get a pleasant surprise!

Black Chocolate Stout of the Brooklyn Brewery is primarily an imperial stout brewed using the technical know-how from centuries ago. However, a modern touch was added to the process. This beer pours an opaque brown body with a creamy crown. The aroma is a mix of chocolate and coffee, with notes of vanilla and nuts thrown in for good measure. There are some fig touches that give you an alluring aroma. To the tongue, the beer is sweet with elements of dried fruits and chocolate. The bitterness of the aftertaste rounds it off beautifully. This beer is medium bodied and of average carbonation.

An imperial stout that will redefine this genre for you, Black Chocolate Stout is what modern stouts are all about. It is edgy, it is engaging and it is eclectic. This is beer brewing at its best. Brooklyn brewery has won a lot of new fans simply with this bottle. This is actually an award-winning bottle!