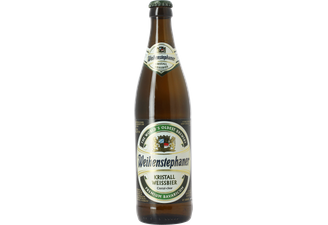 Short BBE* date 09/02/2018. After this date, the beer is still perfectly drinkable, but may lose some of its flavour or nutritional value.

Weihenstephan Brewery is nearly one thousand years old and remains the oldest brewery in the world still in operation.

It is located on Weihenstephan Hill and has gone through many adventures. One thing has remained the same, however: its Weihenstephan beers!

Kristall Weissbier is one of these, and is cited as the second best German Kristallweizen style beer in the world.

It is yellow and clear when poured into a glass, topped by a thick white head.

Its aromas on the nose lean towards malt, wheat, yeast, banana and caramel.

Flavours on the palate include caramel, malt, wheat, fruits, such as banana and orange, yeast, spice and hops.

It is medium-bodied, with a moderate level of carbonation, an oily texture and a refreshing, flavoursome finish.