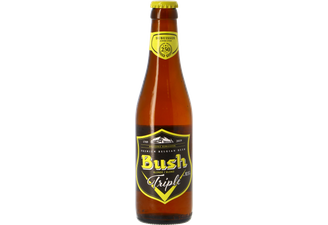 In 1998, in the occasion of the 65th anniversary of the Amber Bush, Hugues Dubuisson created a new Bush for every blond beer lovers…That is how Bush Blond was born. Produced by the oldest brewery of Wallonia still in business, this Bush Blond stands as one of the strongest beers of Belgium.

The beer is brewed with the same know-how that established the other versions as reference beers by using its special yeast that has been jealously kept secret for decades. The Bush Blond pours a pale yellow colour topped by an impressive head. From this head are released malty, fruity and spicy aromas with cereals, apple and citrus fruits notes, along with hints reminiscent of yeast and cloves.

In the mouth, one will taste malty and very fruity flavours. The influence of the different yeasts on the taste is noticeable and is reminiscent of cloves. The alcohol is surprisingly discreet for a beer with a 10.5° ABV and the final bitterness is very light.