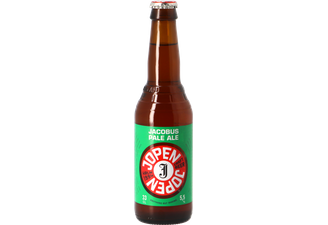 A smooth, red-amber beer with nutmeg, spice and honey flavours

Jacobus RPA by Jopen is a amber Rye Beer brewed with several varieties of American hops, giving it a fruity bitterness.

Taking its name from the Church of Saint-Jacob, later rededicated as Jopenkirk, before being transformed into a brewery and restaurant by Jopen, this beer was born in 2011 to celebrate the Church’s centenary.

Saint Jacob is the patron saint of pilgrims, and to commemorate him, the beer is brewed with rye, as traditionally no tax was levied on rye beers and was therefore popular on pilgrimages.

The aromas are a mix of malt, caramel, dried fruits, nutmeg and honey. The taste is soft, malty and fruity with a fine, spicy finish. The rye is dominant and is the perfect match for the hops.