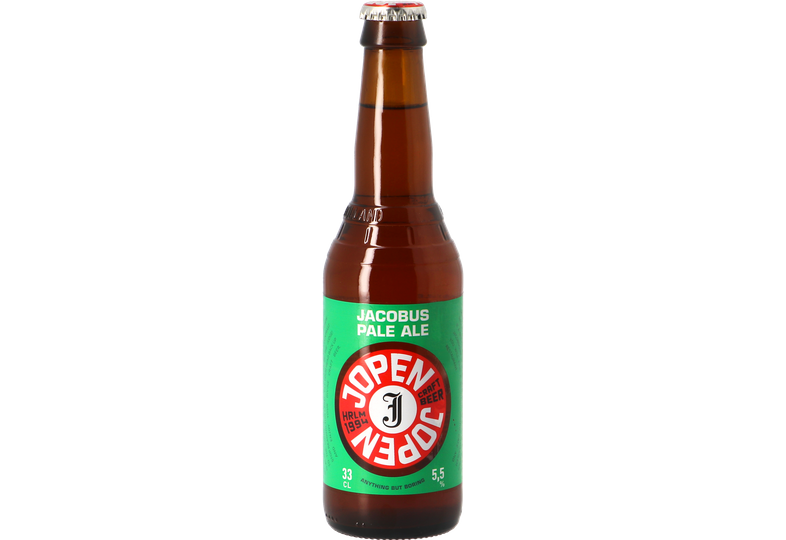 A smooth, red-amber beer with nutmeg, spice and honey flavours

Jacobus RPA by Jopen is a amber Rye Beer brewed with several varieties of American hops, giving it a fruity bitterness.

Taking its name from the Church of Saint-Jacob, later rededicated as Jopenkirk, before being transformed into a brewery and restaurant by Jopen, this beer was born in 2011 to celebrate the Church’s centenary.

Saint Jacob is the patron saint of pilgrims, and to commemorate him, the beer is brewed with rye, as traditionally no tax was levied on rye beers and was therefore popular on pilgrimages.

The aromas are a mix of malt, caramel, dried fruits, nutmeg and honey. The taste is soft, malty and fruity with a fine, spicy finish. The rye is dominant and is the perfect match for the hops.

1.65€
/units3.30€
out of stock
Login or Create account to receive an email as soon as the product is available
Sturdy packaging
Free return
-50%
Jopen Mooie Nel IPA
Jopen1.65€/ unit
1.65€
Instead of3.30€
Page 24 Réserve Hildegarde Blonde
Brasserie Saint Germain2.86€/ unit
2.86€
Decreasing pricesUntil 2.51€
Jopen Trinitas Tripel
Jopen3.20€/ unit
3.20€
Sainte Crucienne Tempête Du Désert
Brasserie Sainte Crucienne3.50€/ unit
3.50€
Decreasing pricesUntil 3.08€
DeliveryAnti-breakage packagingYour loyalty rewardedYour fidelity rewarded: Create an account
4,4/5
Our customers love us and we love them back!
4,4/5
x
Since 2007The largest beer choice on the internet
Customer service
About us
Terms
Follow us
Languages
Our other sites
WHAT PEOPLE ARE SAYING ABOUT US
Saveur Bière is France's market-leader for online beer sales, offering an ever growing range of bottled beers, beer pumps, beer glasses, and beer assortments. Our young, dynamic team has just one goal – customer satisfaction. To ensure our clients are 100% satisfied, we do everything possible to offer a quality service, responding to the needs of our customers and searching out the finest beers you'll find anywhere. True specialists in beer and breweries, our IT, logistics, purchasing, sales and customer-service teams work hard every day to make sure your customer experience is the best it can be.
The abuse of alcohol is dangerous for your health. Please drink responsibly.