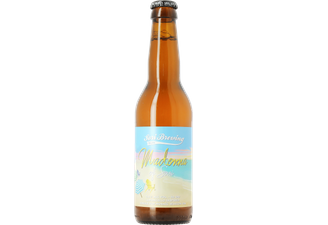 Madonna of Sori by Sori Brewing is a Session IPA inspired by a voyage to Italy. Aside from magnificent weather, they also got to explore the town of Sori and see the statue of the Virgin. Stolen by pirates in the 1600s, the statue found itself at the bottom of the sea, to return to shore years later. This story was repeated during the second world war, when She once again ended up in the drink, as it were, only to find her way back to the beach 11 years later.

A minor miracle itself, Madonna of Sori is a golden-bodied IPA with a small white head. Her bouquet is a mix of malt, and fruity citrus scents.

On the tongue, there’s plenty more fruit including passion fruit, kiwi, and grapefruit, and other exotic flavours, perfectly in keeping with the sun-kissed label.