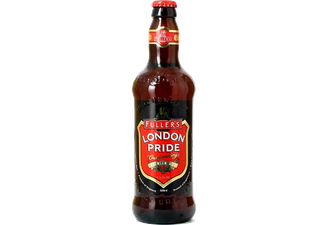 Discover this excellent ale featuring a complex harmony between malts and hops.

The London Pride by Fuller’s is a Premium Ale, leader in the United Kingdom. The beer received two times the best beer title at the British CAMRA of 1979 and 1995 and won the title of Champion Beer of Great Britain in 1979.

It was also rewarded with many prizes across the world, for instance it was crowned worldwide Supreme Champion 2000. It is a rich beer, smooth and finely balanced. Its elegant malt base goes along a well-arranged hoppy character, that probably explains why it is the best-selling beer in the UK!