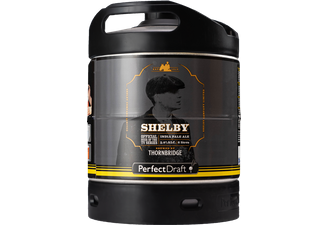 The official beer of the Netflix hit series: Peaky Blinders, now in PerfectDraft!

Bring your empty kegs to a drop off point and receive 5€ for each keg under 24 hours. It’s free, fast and ecological. Find out more

"Close MDD*, preferably to be consumed before 07/31/2022.
*Minimum durability date (formerly DLUO): Beyond the date indicated, the beer may lose some of its taste or nutritional qualities but does not represent any danger to health."

Shelby was inspired by the style of beer consumed in 1919, when Peaky Blinders was founded. So the beer is a really a blast from the past!

By order of the Peaky F*cking Blinders, we had to put this beer in the PerfectDraft. Because, hey, who says NO to the Peaky Blinders, right?

So change your house into "The Garrison" with this cracking IPA from Thornbridge. A golden amber IPA with an aroma of fruit and forest fruit. The taste is accessible, slightly malty and not too hoppy. Let's face it, the Peaky Blinders series need to be watched in Blinders style right ;)?