A tiny brewery with big ambitions

How about a little trip to Wales? If you like craft beer and you're in the area, head south to Newport, a large city of about 150,000 inhabitants, famous for its lively nightlife, its bridges and its microbrewery Tiny Rebel. It may be the youngest in the country, but it's the only one to have won bronze, silver and gold medals at the World Beer Championships. Before getting there, it was a lot of testing and brewing in a garage, as is often the case with home brewers. Gazz taught Brad what he knew about brewing and the adventure began. Our two friends strangely confess that the hardest part was finding a name and a logo. In the end, they found it in the alternative to the big brewery garbage, when they are only tiny players in all of this. The name was finally found: Tiny Rebel, literally translated as "tiny rebel".

The idea behind the name was to connect what the brewery holds dear, such as fun, relaxation, creativity and rebellion, with their infinite love for the urban environment and graffiti. After no less than two years of experimentation and tastings, they released their first two craft beers called FUBAR, a malty, floral and herbaceous Golden Ale, as well as Urban IPA, a top-fermented beer with yeast, grapefruit and caramel flavors. Soon, others followed, filling the bars of the capital with good craft beer. At this point, it's 2012 and the brewery's maximum annual capacity is 800 hectoliters, until the brewery opens its bar in central Cardiff a few months later, to become the largest beer bar in the capital. Over the years, the success is still growing, with investments on brewing equipment, a title of Welsh beer champion to defend every year, many other titles, a short-lived bar opening, 30 new beers every year and a move. Yep, it had to be as maximum brewing capacity was reached and demand kept growing.

July 2017 marks the opening of the new brewery, for a production of 10,000 hectoliters per year, as well as major investments on packaging, keg storage system, a keg machine and even a bottling line. They also took the opportunity to switch from the bottle to the can, which has many advantages such as protection from light to preserve the aromas, ease of storage and rapid refrigeration. They soon realized that the place was still not big enough and bought the annex across the road to be able to expand further. Today, they are omnipresent on the Welsh brewing market and a must for all lovers of good suds. You can imagine that this is why Tiny Rebel is in our tenth Beery Christmas Advent Calendar, and not just any place! 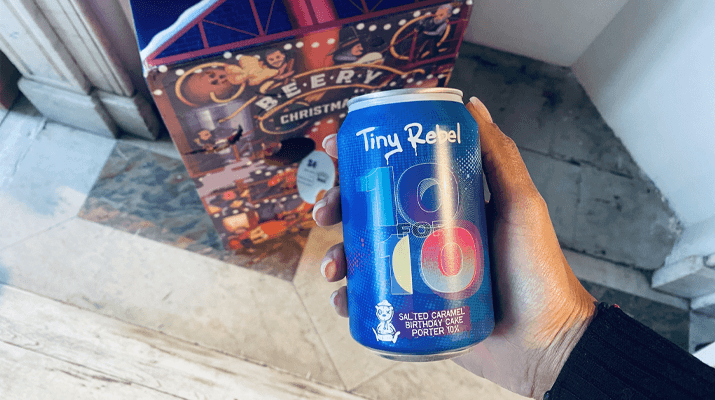 For the last box of our Beery Christmas, we opted for a black beer of Imperial Porter style. It is rich, greedy and complex. When poured into a glass, we see a deep black color topped with a creamy beige head. The nose is sweet like a salted caramel Christmas pudding, with milk chocolate, cocoa powder, frangipane, molasses, muscovado sugar, and a sweet fruity note of blueberry. As you warm the glass with your hands, you'll be able to smell notes of rum raisin ice cream and concentrated milk sugar. From your first sip, the beer completely covers your palate with a thick, sticky texture. This is a sweet beer, with notes of salted caramel, toffee, butterscotch and marshmallow. The roasted and malty character of the beer gives us notes of dark chocolate, hazelnut, cold brew coffee and chocolate cake.

As the beer warms up, the power of the 10% ABV also comes through with a warm feeling. Rich and warm, it has a long finish with notes of salted caramel, alcohol, marshmallow and chocolate. Overall, this is a full-flavored beer that puts you between a traditional Christmas pudding and blueberry fudge cheesecake. This beer was brewed to commemorate 10 years of Beery Christmas and to celebrate the 10th anniversary and partnership with Tiny Rebel. No wonder you find it with a 10% alcohol content. It is a beer to be enjoyed at a temperature of 12°C, with a vanilla and pistachio ice cream. ALCOHOL

ABUSE IS DANGEROUS FOR YOUR HEALTH! PLEASE CONSUME WITH MODERATION.

The history of Bosteels For more than 200 years, the Belgian brewery Bosteels has been going strong, with no less than seven generations succeeding each other since 1791. As the saying goes, the best jams are made in old pots! Just imagine the possibility that your ancestors have already tasted their brews! At that time, the brewery was very important for the city since it...

The story of Poppels Bryggeri Let's go back to where it all started on December 1st: Sweden! Not at Omnipollo, but at Poppels Bryggeri! This microbrewery laid its foundations in 2012 with no less than 15 beer lovers, who joined together to realize a common dream, that of spreading the love of craft beer around the world. Now that's a great life goal! That love began to see the...