At Hopt we like to get to know our producers, so we caught up with one of Spanish Craft Brewery La Virgen’s three founders and marketing manager, César Pascual, as he gave us an exclusive insight into Spain’s biggest Craft Beer success-story.  Speaking to us from La Virgen’s brewery just outside the Spanish capital, we started by asking a question he’s been asked a thousand times: just where di La Virgen come from?

The story goes César met his future brewing partners while he was working at an ad agency in San Francisco, California “As you know, there’s a great ttradition of Craft Beer all down West Coast USA, and we thought ‘maybe there’s a place for artisan brewing Spain. After a lot of conversation, we decided to launch Cervezas La Virgen in 2011, because we always thought Madrid deserved better beer,” he laughs “but also because Spain needed a Craft Beer revolution of its own!” 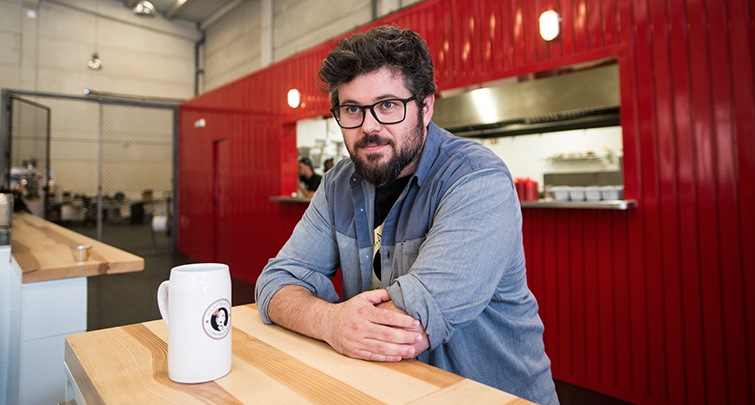 On the subject of La Virgen’s rapid and exponential growth, which since 2011 has gone from a team of just 4 to over 80 people today, he is naturally proud of La Virgen’s success, but remains humble “After 7 years we have become one of the Craft Beer scene’s biggest beer brands, both in terms of volume and quality. The most difficult thing delegating. When you’re growing at a rate of almost 100% you need an awesome team and you need to be able to delegate things that you’ve been doing your own way for long time. That costs, but if you want to grow that’s what you got to do!”

When it comes to La Virgen’s core ‘Annuals’ range of Craft Beer, César is expansive, talking enthusiastically about his bread and butter “The annuals range consists of basic styles that every brewer know inside out. The first is Madrid Lager, a Helles style Lager that helped us to get a foothold in Madrid’s bars and taprooms. That was followed by Jamonera, an Amber Ale that’s perfect with a great Iberian ham sandwich or any kind of tapas you find in any one of Madrid’s cafés. Then there’s 360, a beer designed open up peoples palates to new taste experiences and bring them into the worldof Craft Beer. Finally, there’s our IPA – a style that no Craft Brewer should be without. So, we have four basic styles – a classic Lager, a very English style, a hoppy beer and a full-on IPA. Then we added Trigo Limpio – a clean, crisp  Hefeweizen to make up our quintent of core beers.

We also took the opportunity to ask about aluminium beer cans, which recently became the container of choice for Madrid Lager. Again, César is upbeat one the subject “I know aluminium cans have their detractors around here, mainly due to misinformation. We launched the Madrid Lager in cans because it is a more ecological container: it weighs less and it’s les expernsive, it can be transported better and by blocking light, it keeps the beer fresher.” Nevertheless, he has other reasons for adopting aluminium “The truth is, we adopted aluminium cans because we love what it represents: barbecues, concerts, the beach, the mountains: a beer like our Madrid Lager had to be in a can.

But we expect to have some news on this real soon, as both our annual beers, and our limited-edition draft beers should soon be making the jump to cans.”

We also took the opportunity ask about La Virgen’s Beery Christmas contribution last year. Blended with finest Spanish brandy, La Virgen Solera Porter was one of the undisputed highlights of the Craft Beer Advent calendar “We knew this calendar from previous years. We always thought it was a great opportunity to discover beers from around the world, so for La Virgen Beers it was a pleasure and a challenge at the same time. We had to look for something different to really surprise people. This pack is usually bought by people who already understand the world of Craft Beer, so the bar was set high.”

While Solera Porter was a solo effort, La Virgen are not afraid of the odd collaboration now and then. “We love collaborations. We only make beer with friends, with people we are comfortable with and whom we can learn from and exchange ideas. It’s the essence of what we do as brewers. Share experiences, recipes and flavours brew a finished product we can be proud of. We don’t think about possible synergies, or the profit margin, or whether the whole world will love it. It's a time to have fun, tell us our things, have a few beers and make great beer together. Nothing more and nothing less.”

With this in mind, we took the chance to ask what new La Virgen flavours might be coming soon. The answers were no less surprising “ We just took dfelivery of three 3,000-litre foudre casks, so we’re itching to try barrel aging beers with different fruits. We should have some interesting new surprises for you real soon…” he promised.

Finally, no interview with a Craft Brewer is complete without a list of beer greatest-hits. César’s top-picks were diplomatic, but nevertheless surprising “This is always very complicated as it depends on the moment and the tastes of the consumer. Maybe tomorrow I’d give you another 3, but right now, I would think of 3 very different styles to see what you think: La Bécasse Kriek, Omnipollo Zodiak IPA and Aecht Schlenkerla Rauchbier Märzen.

So there you have it, the La Virgen story from start to, well, now – it ain’t finished by a long chalk. Expect new flavours, new packaging, and a whole bunch of new surprises any time soon…

Thomas Hardy’s Ale: A timeless classic celebrates 50 years... First brewed in 1968 to celebrate one of England’s most iconic authors, Thomas Hardy’s Ale is a classic Barley Wine with fine fig, tobacco and old leather notes that has become an icon in its own right thanks to its distinguished heritage and more than a little determination! Originally brewed by...

Mikkeller and Evil Twin are two exceptional breweries run by two twin brothers and fuelled by a certain antipathy. In fact, their relationship is so rocky that when Evil Twin’s Jeppe Jarnit-Bjergso set up his own brewery he decided to cross the Atlantic just to put few more miles between them. There’s aways going to be friction between siblings, but sadly some...