British Beer and British Food: Part I - A match made in…

If there’s one thing we all know about the British it’s that they can’t cook. Right? Well, yes and no. It’s more accurate to say that the brits have forgotten how to eat, but it’s coming back to them slowly. And they can still brew beer like there's no tomorrow…

Around the world, the British have a reputation for a poor diet and an inability to cook that, together, make for a truly woeful contribution to the world of international cuisine. Ok, so there are baked beans, Marmite and prawn cocktail crisps, but is the reputation really fair?

To put it into a historical context, during the Second World War, Great Britain was subject to strict rationing of even the most basic ingredients. Not just essentials like soap, petrol and clothes were strictly controlled, but basics like butter, flour, milk, sugar and meat were all restricted in order to help the war effort.

If you wanted pork, beef or lamb, you had the choice between a few grams of prime cuts, or a much more filling amount of heart, liver, kidneys – in short, all the bits that, before the war, you only ate if you were dirt-poor. 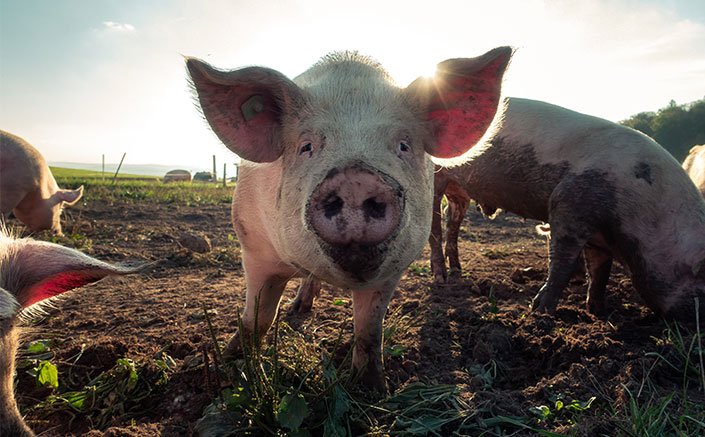 "While most of Europe continued its love-affair with nose-to-tail eating, it’s only very recently that Albion has got back in touch with its food heritage. Thankfully, the same isn't true of beer"

Although restrictions were eased directly after the war, certain ingredients like sugar and meat stayed on the ration until 1954. The result was a population who wanted meat and lots of it.

Gone were the days of eating steak and kidney pie, faggots, liver and bacon – and with it, some of our best traditional recipes - Britain wanted plentiful cuts of cheap meat.

Proof of this can be seen in the shape of a pig bred at the start of the 20th Century compared with today’s mass-produced, factory-farmed porkers without an ounce of fat on them. This was purely to maximise the yield of meat and minimise waste. While the brits used to eat every bit of the pig “except the squeak”, Britain had officially fallen out of love with offal, and while most of Europe continued its love-affair with nose-to-tail eating, it’s only very recently that Albion has got back in touch with its food heritage.

Another factor that has always had an impact on the British diet is the climate. British food has always been designed to keep the worst of the Great British weather at bay. So it’s heavy. If you’re thinking of eating English, take my advice and don’t go swimming afterwards!

The Brits have long been known by our Gallic neighbours as ‘les Rosbif’ – the beef eaters – thanks to our penchant for a nice bit of roast beef, but traditionally, Sunday roast beef was also the family meal for the rest of the week.

From Monday to Saturday it would become a soup with less and less meat and more and more vegetables. This increasingly long soup used to be a common feature of the diet across the British Isles, and the definitive version has to be Irish Stew - AKA Scouse if you’re from Liverpool – a soup-stew made with lamb (the cheaper cuts like neck or ribs are best), as well as potatoes, carrots, swede, onions and lots and lots of pepper. You can replace the onions with leeks and call it Welsh Stew or Cawl.

If you fancy trying the Welsh Cawl version, then you can’t go wrong with a Welsh bitter as the hops work perfectly with the sweetness of the leeks. How about something like Tiny Rebel’s awesome Cwtch, a Welsh word meaning hug and a perfect metaphor for this superb comfort food.

Steak and Kidney Pudding and Beer

If the British classic ‘Steak and Kidney Pudding’ doesn’t sound like your kind of thing, then you’re probably not going to be wild when you see it, but bear with us… It’s worth noting at this stage that pudding doesn’t always mean the same thing as dessert!

The secret to eating like an Englishman is never looking at what you are eating. In fact, it’s best not even to think about it. Just put a fork-full in your mouth, chew and trust your tongue, and that’s exactly how it works with Steak and Kidney Pudding.

Good Steak & Kidney pudding is an artform involving a surprisingly light suet pastry (made with shredded beef fat) filled with prime beef and chopped calves’ kidneys all steamed in a rich onion gravy sauce - made with finest quality ale if you're feeling that way inclined. Ok, so it sounds barbaric, but again if you just put faith in your tongue then it’s heaven on a plate. The perfect Steak and Kidney – commonly known among the cognoscenti as ‘snake and pygmy’ – should be served with fresh garden peas and a pint of good old-fashioned English Ale. Nothing fancy, something like the granddaddy of them all, Fuller’s Pale Ale or Black Isle Goldeneye or even Wadworth’s 6X, something of a well-kept secret among English beers.

Steak and Ale and Oyster Pie …and beer

Oysters haven’t always been a rich man’s food. Just a hundred years ago they were still considered a cheap source of protein, only fit for the poorest in society. Nevertheless, somehow sucking down a live bivalve mollusc is now seen as a luxury – go figure.

If you’re not a fan of raw oysters, then one must-try dish from the British recipe menu is Steak and Ale and Oyster Pie. The recipe involves cooking oysters and beef in stout or ale with onions and mushrooms - just in case there wasn't enough protein - and encasing the whole shooting-match in rich, buttery shortcrust pastry (never flaky pastry, that would be an abomination).

The result is a gorgeous mix of rich savoury beef with a thick beer and onion gravy and a slight hint of iodine from the oysters. Serve it up with a deliciously dark Porter like Cromarty’s gorgeous Ghost Town or the all-time classic Fuller’s London Porter, or an IPA like 13 Guns from Thwaites, and you’ve got a meal fit for a prince! 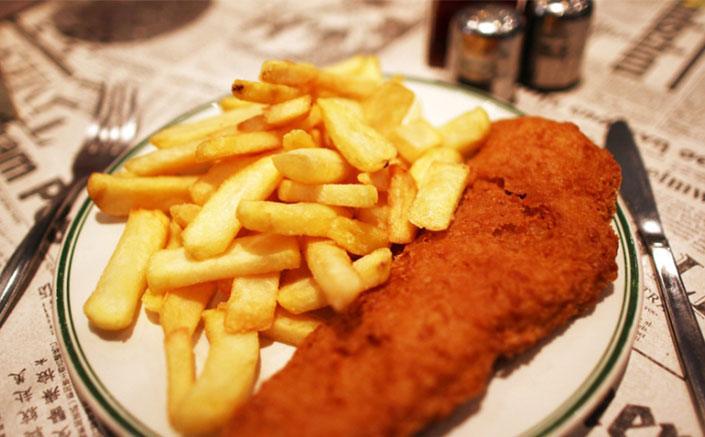 Secondly, Fish and Chips should be served absolutely fresh straight out of the fryer, with the batter rustling and the chips still steaming. If it’s allowed to sit for any length of time, it steams, then the batter and chips get soggy and that’s not good. You also need the oil to be fresh, and very, VERY hot. That’s why it’s difficult (though not impossible) to at home as a domestic fryer just doesn’t get hot enough.

Also, forget the slice of lemon. That’s just window-dressing. You need salt and vinegar. Trust me on this one.

So, once you’ve selected your chippy and ordered your cod and chips (or better still, haddock) what should you drink with it? Well, a cup of builder’s tea is good – that’s English tea with milk and two sugars strong enough to stand the spoon up in – but if you want beer, then you need a pint.

Heading north of the border to Scotland, there is only one dish to choose. Sure, Scotland is famous for its game like grouse and venison, as well as superb highland Aberdeen Angus beef, but if you want to experience the true taste of Scotland then you need to try haggis.

Once again, this diabolical mix of sheep’s heart, lungs and liver, with oatmeal and a ton of pepper sounds terrible. Oh, and I forgot to mention, it’s cooked inside the sheep’s stomach. But it’s seriously good eating. Especially served with buttery mashed tatties and neeps – potatoes and swede or rutabaga.

Drinks wise, it’s traditional to serve it with a generous tumbler of Scotch whisky, but it’s supremely good with beer too. In fact, Scotch Ale and Wee Heavy are perfect, with the sweet malts and spicy hops a perfect match for this peppery, savoury dish.

So, that’s the main courses sorted, but what about the dessert? Well, Great British desserts are a little more inviting for the uninitiated, and they’re pretty good for those of a sweet disposition too.

"It’s true that British cuisine is maybe not the lightest in the world, but it can be some of the best."

The roly-poly or steamed pudding family is a classic that uses the same suet pastry as the Steak & Kidney pudding above, but instead of savoury filling, there’s just a layer of strawberry jam, golden syrup or treacle at the bottom. And then there’s Spotted Dick – suet pastry with dried currants and raisins in it. These are great with a Wild Ale like Thornbridge’s award-winning Love Among the Ruins  to really cut through the toothache sweetness.

Two of the very best British desserts – sometimes referred to as ‘afters’ for obvious reasons -are the mouth-wateringly fruity Summer Pudding and creamy, fruity Eaton Mess.

The former is made by lining a pudding bowl with slices of white bread, then packing it out with a mix of sugar, summer fruit and berries – fruits of the forest. The bread soaks up the fruit juices, and it’s then just a matter of serving with fresh cream.

Eton Mess, originally designed as a dessert for the exclusive public school at Eton, a breeding-ground for the great and the good, including future Prime Ministers, is a mix of summer fruit, with whipped cream and crushed meringue. Both of these summery desserts are perfect with sharp, fruity Sour Ales – sweet, sharp Krieks are perfect, or coffee and chocolate Imperial Stout like Buxton’s supremely smooth Highland or White Hag’s sumptuous Black Boar.

It’s true that British cuisine is not the lightest in the world, but it can be some of the best. The British have forgotten a lot of what’s great about Great British food, but thanks to Artisan Beers and Craft Brewing, the Brits are getting back in touch with everything that makes English, Irish, Scottish and Welsh food great!