Welcome back. We hope you managed to find Beer Number 2 ok. Today we’re in Scotland for Tempest’s gorgeous Cranachan, a Scotch Ale inspired by a classic Scottish dessert…

Like so many top brewers, Beery Christmas newbloods Tempest Brewing’s story begins in a garage, as a small setup with big ideas. The goal to brew exciting beers not found in Scotland.

After much searching, Tempest’s founders, Scotsman Gavin and New Zealander Annika - another husband-and-wife brewing team - finally opened their doors in 2010, launching the celebrated Long White Cloud, the beer that would become a hallmark of the brewery’s enduring commitment to quality.

To keep up with demand, in 2015 Tempest moved to a new brewery that would allow them to increase production to 30hl.

Despite this massive increase in capacity, Tempest remains committed to quality, its watchwords being quality and creativity, a philosophy that has seen them inducted into Ratebeer's exclusive list of the World's Top 100 Breweries. 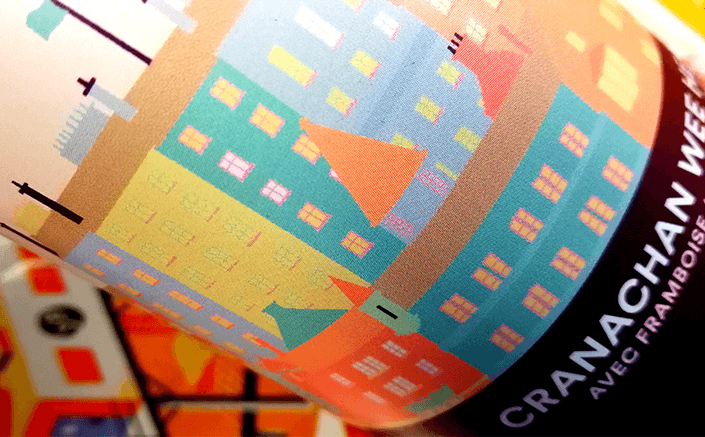 For their contribution to Beery Christmas 2018, Cranachan, Tempest Brewing Company have gone back to their Scottish roots, taking their inspiration from the archetypal Scottish beer style, Wee Heavy. They also borrowed from the classic Scots dessert Cranachan - a gorgeous mix of toasted oats, fresh raspberry, honey, whisky and cream.

With a full-body and warming alcohol note typical of the Wee Heavy style, the sumptuous silky texture adds a perfect fig-and-date touch full of rich, creamy malts, to subtle raspberry fruitiness and a measured bitterness that cut the sweetness beautifully, taking you to a satisfyingly rounded, faintly peat-smoked finish.

Traditionally brewed for a cold, wet, generally inhospitable climate - 11 months of the year in Scotland - Scottish beers are often darker, sweeter brews with a less full-on hops profile than those brewed south of the border. The strongest of Scotland’s traditional beers was Wee Heavy aka Scotch Ale, which shares a lot of its characteristics with Barley Wine, including a sweet fruity toffee caramel character and a light hops quality.

The ‘Wee’ – Scots dialect for small - in Wee Heavy comes from the bottle size. Thanks to its strength and the tax payable, Wee Heavy was usually sold in 6-ounce bottles - about 180ml today.

Scottish beers were traditionally classified as 60/-, 70/-, 80/ or 90/- shilling, the number relating to the strength of the beer – Light, Heavy, Export or Wee Heavy – as well as the price of the barrel and the tax to be paid in shillings, the old British currency written as /-. We're not saying the Scottish like to know the price of everything, but...

…or to put it another way, ‘Cheers!’ It’s a little-known Scotch custom, but if you ever visit a pub in Scotland, it is customary to buy everyone in the bar a beer!

Actually, that's not true, but if you want to experience a true pub ambience, then Scotland is the place to go!

So, that’s two down, twenty-two equally awesome beers to go. I hope you enjoyed today’s beer. See you bright and early tomorrow for the next leg of our Craft Beer odyssey…