France's award-winning Ninkasi brewery is the brainchild of three young graduates. Tracing its history to a road-trip across the USA in the late 1990s, during their expedition Ninkasi's founders discovered the world of Craft Beer through the growing phenomenon of the BrewPub. Fast-forward more than 20 years, and the Ninkasi empire, named after the Egyptian goddess of beer, includes a string of highly acclaimed BrewPubs and now a distillery. Brewed at a converted dye factory near the French city of Lyon, Ninkasi's exceptional quality owes much to the local spring water, carefully selected natural ingredients, and more than a pinch of talent. Now three slightly older graduates, the guys at Ninkasi have lost none of their lust for life, and with a continued thirst for great beer, hopefully the adventure will continue for another 20 years. For Beery Christmas 2018, Ninkasi are ably assisted by Cervejaria Colorado - a Brazilian brewery with a thirst for mixing classic beer styles with vibrant, tropical-inspired flavours and some distinctly Latin rhythms... 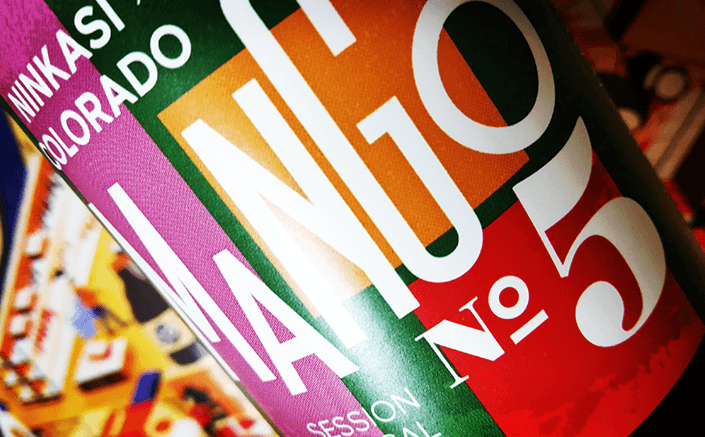 Ninkasi's Mango Number 5 ***Warning: You must be over 25 to enjoy this joke! If you are a millennial, please ask an old person to explain it to you... :p *** Session Tropical Ale is a light, refreshing, super-sessionable Golden Ale, and Beery Christmas 2018’s first collaboration. Brewed with their friends at Brazil’s Cervejaria Colorado, No.5 uses spicy, citrusy Aramis hops, and juicy mango purée to create a sharp, fruity character that blends the best flavours from the two countries. Fresh, light Pilsen malts and a lively carbonation make an excellent base for smooth, fruity mango and just a hint of sharpness to bring a pleasing crispness, before the citrus hops whisk you away to a long, tropical finish.

All hail the Session Ale!

Hard to pin down, Mango No.5 has a style all its own. As a Session Tropical Ale, it draws heavily on the Fruit Ale style, which uses fresh fruit - in this case mango - to give a sharp, crisp, unmistakeably fruity edge. Meanwhile the Pilsner malt, modern hop-forward character, as well as the light, super-refreshing, super-sessionable body and 4% ABV, all conspire to give an American Pale Ale or more traditional Pale Ale character. However, you classify it, all the elements that make up a Session Tropical Ale also make it a perfect sipper!

The term Session Ale is more of a stylistic thing than a beer style in its own right. To qualify as a session beer, Ales and Lagers need to balance satisfyingly well-developed flavour profiles, which means liberal use of quality hops and malts, with an alcohol content low enough that you can enjoy a few beers without needing a lie-down. In short, Session Ale means going easy on the alcohol – as a rule they come in at under 5% - while not skimping on the flavour!