A long-time favourite of Saveur Bière and HOPT customers, not to mention a familiar face from previous Beery Christmas, Oppigårds is a family-run brewery from Dalarna, Sweden.

Set on the farm they’ve called home since 1735, the brewery took shape in the mid-1980s, gradually increasing production from just 8000 litres to over 2million today.  Surrounded by meadows, Oppigårds takes its inspiration from nature, embracing sustainability in every aspect of its brewing.

Confessed Germanophiles, and always up for a collaboration – last year they partnered with Bavaria’s Ganställer – this year Oppigårds joined forces with Bierol, a young Craft Brewery from the Austrian Tyrol halfway between Innsbrück and Salzburg. Since 2014, Bierol have been putting their own distinctly Germanic stamp on traditional styles and are now beginning to make a name for themselves outside their native Austria…"

Oppigårds and Bierol Hopfenweisse – a match made in heaven (and Austria) 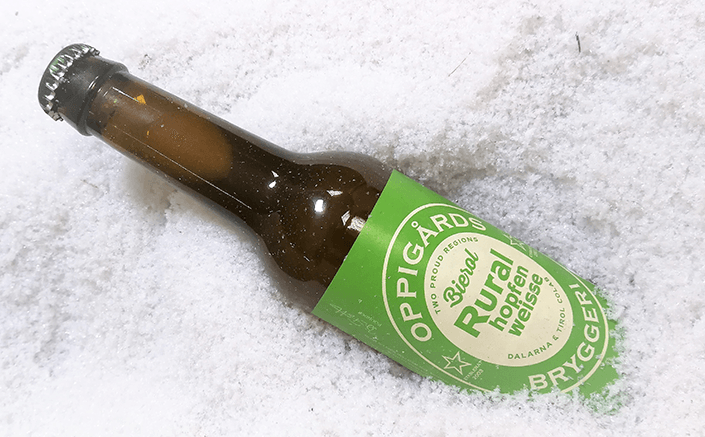 Just like last year, Oppigårds used their collaboration as an opportunity to really get inside the style they chose to brew, and to make it their own. Set in a hazy gold body with a generous white head and soft-to-medium carbonation, Rural Hopfenweize breathes a classic bready malt character spiced up with modern American hops.

With its characteristic wheat sharpness, the smooth, classic wheaten body is appropriately crisp, with more bready malts and a creeping hops bitterness that suddenly explodes onto the tongue with spectacular results. One for the hop-heads out there, the tasting concludes with a long, dry, herbal hops bitterness that lingers long on the palate.

Cool, crisp and deliciously bitter, Rural Hopfenweisse by Oppigårds and Bierol is a perfect pre-dinner sipper – the natural bitterness in hops is a great way to get your digestive juices flowing! – but it’s a great companion for main courses too.

We asked the guys for their favourite food pairings and they told us Cajun chicken fajitas – once again, there’s just something about the clean, crisp malts and immediate bitterness that work great with spicy food.

The grandaddy of White IPA?

The forefather of the enduringly popular IPA style, Hopfenweisse are a classic style from across Germany and Austria. Hopfenweize are essentially hoppy Wheat Ales – also known as White IPAs – that combine the generous hopping of an India Pale Ale or American IPA with the crisp, bready character of a German wheat beer or Weizen. They are commonly brewed with up to 70% malted and un-malted wheat grain. While Wheat Ales tend towards the milder, fruitier end of the Craft Beer spectrum, Wheat IPAs are a more brash, in-your-face style that will appeal to hopheads thanks to the pronounced bitterness.