And, if you're one of those thousands and thousands who have asked the PerfectDraft team or the Tennent's team for this to happen, well, thank you. You made it happen.

If you're wondering why it's been one of the most asked for beers of all time on PerfectDraft, here's why.

As one of the taglines says: Tennent's is Scottish for lager. If you've not been to Scotland, it's hard to express just how widespread this Glasgow-based brewery is across the country.

To understand why it's essential to start at its roots... and they run deep in Scotland; 450 years deep.

Tennent's association with brewing at Wellpark in Glasgow can be traced back to 1556 when Robert Tennent established the brewery in Glasgow. Tennent's is the oldest business still in existence in Scotland.

Back in the 16th century, they weren't drinking Tennent's Lager as we know it now, of course. That came in 1885 after Hugh Tennent tasted a light, sparkling beer on a trip to Bavaria. He returned home and started producing it for Scotland.

Tennent's Lager today is brewed – in Glasgow's Wellpark Brewery – with fresh Highland water from Loch Katrine, exceptional Scottish malted barley, hops, and a unique historic strain of yeast. The result is a perfectly balanced, crisp, refreshing taste. No wonder it's so sought after. 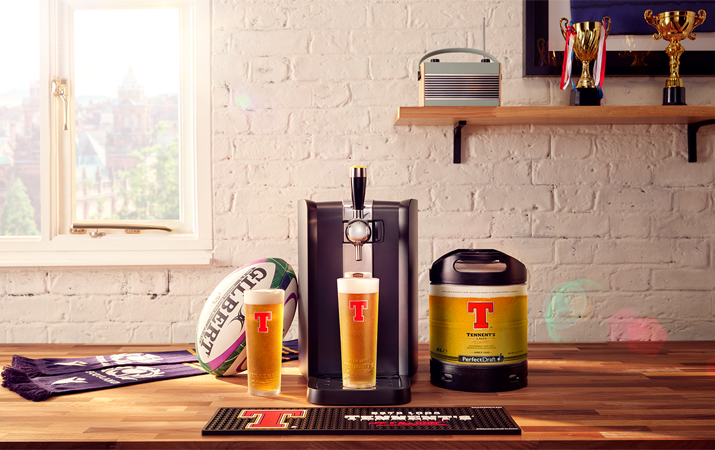 "Our fans are a passionate bunch and when they want something, we listen, especially when 4,000 of them want the same thing. Naturally, Scots are missing fresh draught pints at the moment so when the opportunity arose to make them a reality at home with PerfectDraft we jumped on it.

"Whether it's watching rugby or football, getting through another Zoom quiz or simply relaxing after a day of working-from-home or home-schooling, there's not much that a fresh, chilled pint of Scotland's favourite lager doesn't make better. And, while hospitality reopening is thankfully in sight now, there will be a huge amount of entertaining at home this summer, so do it with a Tennent's in hand."

Tim Deeks, PerfectDraft Product Owner, added: "We've had requests almost daily from our customers to put Tennent's Lager on PerfectDraft, so we did. Partnering with Scotland's favourite lager was a no brainer and the demand has been so great that we've prepared more kegs of Tennent's than we have for any other beer.

"PerfectDraft brings the ultimate in-home beer experience to beer lovers, and now we can all enjoy Scotland's favourite lager at home, on draught."

Why you need a Dunkel in your life  And new on PerfectDraft, is Franziskaner Dunkel Hefe-Weisse.  Dunkel is German for ‘dark’ and this brew from the renowned Bavarian brewery Franziskaner, is a dark wheat beer brewed. It's often found served in the winter in mountain huts in the Bavarian Alps, in in the beer halls of Munich. It has a lush, cream-colored...

“We came here not to make enemies; we came here to make friends.” – Thomas Shelby . With that sentiment, admittedly rare among the Peaky Blinders, PerfectDraft brings you six-litre kegs of Shelby, a 5% IPA brewed by Thornbridge Brewery The Shelby Company Ltd.    Yep, this is the official beer of the BAFTA award-winning TV series Peaky...